A Leadership Team with a Godly Vision.

We are blessed to have some of the most committed and well qualified specialists on our leadership team. Their prayerful dedication to their call and their prayerful hearts leads us all closer to Christ. 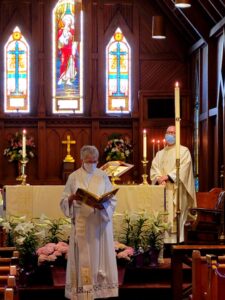 The Rev. Dr. Peg Davis has been ministering to God’s people for 40 years in a variety of roles. She and her husband Bill, live in Tavares. Together they have 4 married children, 7 grandchildren and 8 great-grandchildren – mostly in Ohio and Texas.  Born and raised in northeast Ohio, she was confirmed into the Episcopal Church as a young adult. Upon marrying a Roman Catholic, she converted so that their family could worship together. The parish priest, recognizing her call to ministry appointed her Director of Religious Education for the parish and school. During that time, she earned her BA in Religious Education and Lay Ministry from Mercyhurst University in Erie, PA. For 13 years she served as DRE in parishes in Ohio and Indiana. Upon completion of her MA in Theology from Xavier University, she became the Director of Family Ministry for the Archdiocese of Cincinnati.

Peg and her staff created, implemented, coordinated programs and ministries for families, marriage, respect life, and end of life for 229 Roman Catholic parishes within the 19 counties of Southwestern Ohio, which gained national attention and received several prestigious awards for innovation and healing.

In 2005, she married the love of her life, Bill Davis and moved to Florida where she taught for Saint Leo University on MacDill Air Force Base in the fields of Religion and Psychology. Peg’s further call to pastoral care led her to complete an internship and yearlong residency in healthcare chaplaincy. As a board certified chaplain she served in hospital and hospice settings. She received her Doctor of Ministry in Pastoral Care from the Graduate Theological Foundation in 2012 where her project on Compassion Fatigue and Demoralization Syndrome received the Dorothy Day Award for research.

This work brought Peg to an ever deepening discernment of her faith and calling, she reaffirmed her Episcopal faith, began her studies with the Institute for Christian Studies and was ordained a vocational deacon in 2015. While carrying for her aging parents, she served at Holy Faith in Dunnellon.  Prior to her arrival at St. Gabriel’s she served at St. George in the Villages.

Peg is also an author, international speaker, retreat facilitator and workshop presenter. Most recently in our diocese she designed and presented morning Reflections for women entitled: Women at the Well.

Pastor Peg is currently a Candidate for the Priesthood in the Diocese of Central Florida.

The Reverend Doctor Kenneth Nolen was ordained to the Priesthood at St. Gabriel’s on April 14th, 2018.  Formerly a pastor in the Assemblies of God and Pentecostal traditions, Ken has thrived in his new denominational home. In addition to shepherding Morning Prayer services, he teaches our Wednesday Evening Bible Studies and provides pastoral care to the community. He is lives with his wife Annette, who is an active member of the Daughters of the King, and son, Christopher.

Mary recently retired from her position in Finance at NASA, where she worked along side Richard Cota, our treasurer. Her love of God, and her accounting prowess serves the community well. We are blessed to have her!

David Herzog is a very talented music teacher and voice instructor. His expertise in vocal training has improved our choir’s skill levels considerably since joining us in 2012. He received his degree in Music Education at Florida Southern College and his Masters degree at he University of Central Florida 2019. He is married to Karen, who is an extraordinary singer in her own right.