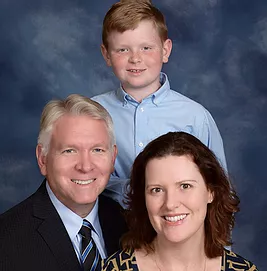 Edwin Hill is an Oncology RN at Health First Cancer Institute. He recently graduated with a Master’s Degree in Leadership and Management and has years of management experience. Edwin has been an active member of St. Gabriel’s since 2003. He and wife Jenni were married here in 2004 and son Graham was baptized here 3 years later. He served on the Rector Search Committee in 2009. In 2010 Edwin served as Vestry member and became Senior Warden in 2012. Father Rob, Deacon Johnny Clark, and Edwin started Weight For God in 2012 and this program continued over the years. Edwin helps out with Sunday School, supports Verger wife Jenni, Acolyte son Graham, Choir brother Dan, and Healer Aunt Jo participate in Sunday Service. To Edwin, St. Gabriel’s is a family affair.