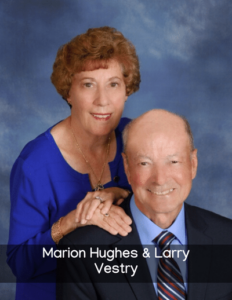 Marion Hughes is a lifelong communicant in the Church of England and the Episcopal Church. Born and raised in Chester, England, she was baptized in the 12th century St. Oswald’s Church where she was later married to husband Larry. After graduating from Chester Business College she worked in research at Unilever in England. The couple immigrated to Ashtabula, Ohio in 1960 and became active members of St. Peter’s Episcopal Church. They came to Titusville and St. Gabriel’s in 2003. Marion shows Christ’s love be serving as a Lay Eucharist Minister and Lay Eucharistic Visitor.